This is our most popular tour; you’ll see the best of Los Angeles seen like never before. We’ll cover in 1 hour what would take over a day to cover by car!

Departing from Hawthorne Airport we will fly to the Port of Long Beach and low around the Queen Mary, through the Port of Los Angeles to the Vincent Thomas Bridge. Past the LA Cruise Ship Terminal and low along Ports of Call towards Cabrillo Beach. As we fly past Terminal Island home of the Federal Corrections Institution, the US Coast Guard base and the new Disney Cruise Ship Terminal. At Cabrillo Beach we head north along the coast of the Palos Verdes Pininsula, past the Point Fermin Light House, the Korean Bell of Friendship, World War II bunkers, Trumo National Golf course, Portuguese Bend (Where the Channel Islands broke off from the mainland millions of years ago), Wayfarers Chapel, Terranea Resort, Point Vicente Light House, The ship wreck remains of the SS Dominator. We continue along the coast towards the beach cities of Los Angeles. 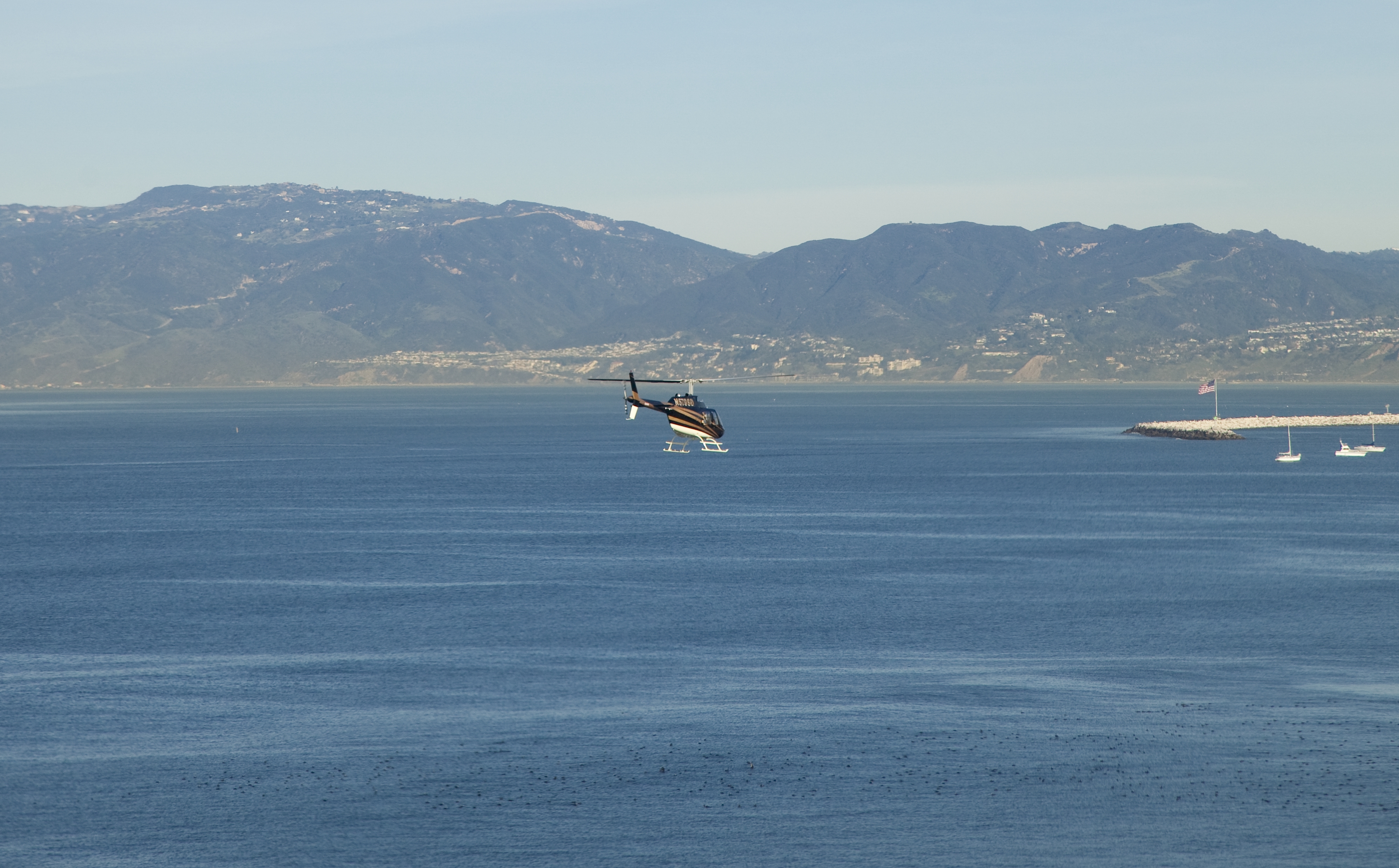 Flying low along the coast like a bird, you’ll see dolphins and surfers as we fly along Torrance Beach, Redondo Pier, King Harbor, Hermosa Beach, Manhattan Beach, LAX (As planes are taking off right above us), El Segundo Beach (The only beach in LA that allows fires on the beach), Marina Del Ray, Venice Beach and the Santa Monica Pier (Route 66 used to end at the pier).
We’ll make a swooping turn past the Santa Monica Pier as we head east to start our journey towards the cities of the Stars. Flying past the Getty Museum, UCLA, Beverly Hills, Bel Air, Rodeo Drive, The Playboy Mansion (and it’s famous grotto), Aaron Spelling’s Mansion ( It’s for sell for a jaw-dropping $150 million, making it the most expensive home for sale in the U.S. At over 56,000 square feet it’s larger than the White House.), Beverly Hills Hotel, West Hollywood and along the Hollywood Hills to downtown Hollywood, Grauman’s Chinese Theater, Dolby Theater (Home of the Academy Awards) and the world famous Walk of Fame.
You’ll get your first look of the Hollywood Sign as we head towards the San Fernando Valley known as “The Valley”, You’ll actually feel the air temperature rise about 10 degrees as we are flying over the Hollywood Bowl towards Universal Studios and the Back Lot. You’ll be surrounded by many famous studios such as Warner Brothers, Disney and NBC. We will start a climb to the Hollywood Sign.

The Hollywood sign, so close you can almost touch it. Try and get more than 4 letters of the sign on your camera as we fly by. There is no other way to get closer to the Hollywood sign then by Helicopter. Look closely below us as we pass by the Sunset Ranch Hollywood Riding Stables, they have a miniature copy of the Hollywood sign on the hills above them.
We’re now headed to Down Town Los Angeles “DTLA”, past the Griffith Observatory, over Silver Lake to “Dodgertown”, that’s right, Dodger Stadium is it’s own town zip code 90090. We’ll fly over the Cathedral of Our Lady of the Angels, Walt Disney Concert Hall, LA City Hall (The tallest building in the world using elastomeric base isolators) and LAPD’s Hooper Heliport. Flying along the east side of DTLA below the US Bank Tower (The tallest building in the world from Chicago to Singapore), LA Live and the Nokia Center (LA’s version of New York’s Times Square) and the Staples Center (Home of the LA Lakers).
We’re on the last leg of our flight headed south, flying over USC, the Los Angeles Memorial Coliseum (Host of 2 Olympics), Hollywood Park and the vast complex of LAX off to the right. A turn west over the 110 and 105 freeway and we’re on final approach to Hawthorne Municipal Airport (The home of Star Helicopters). 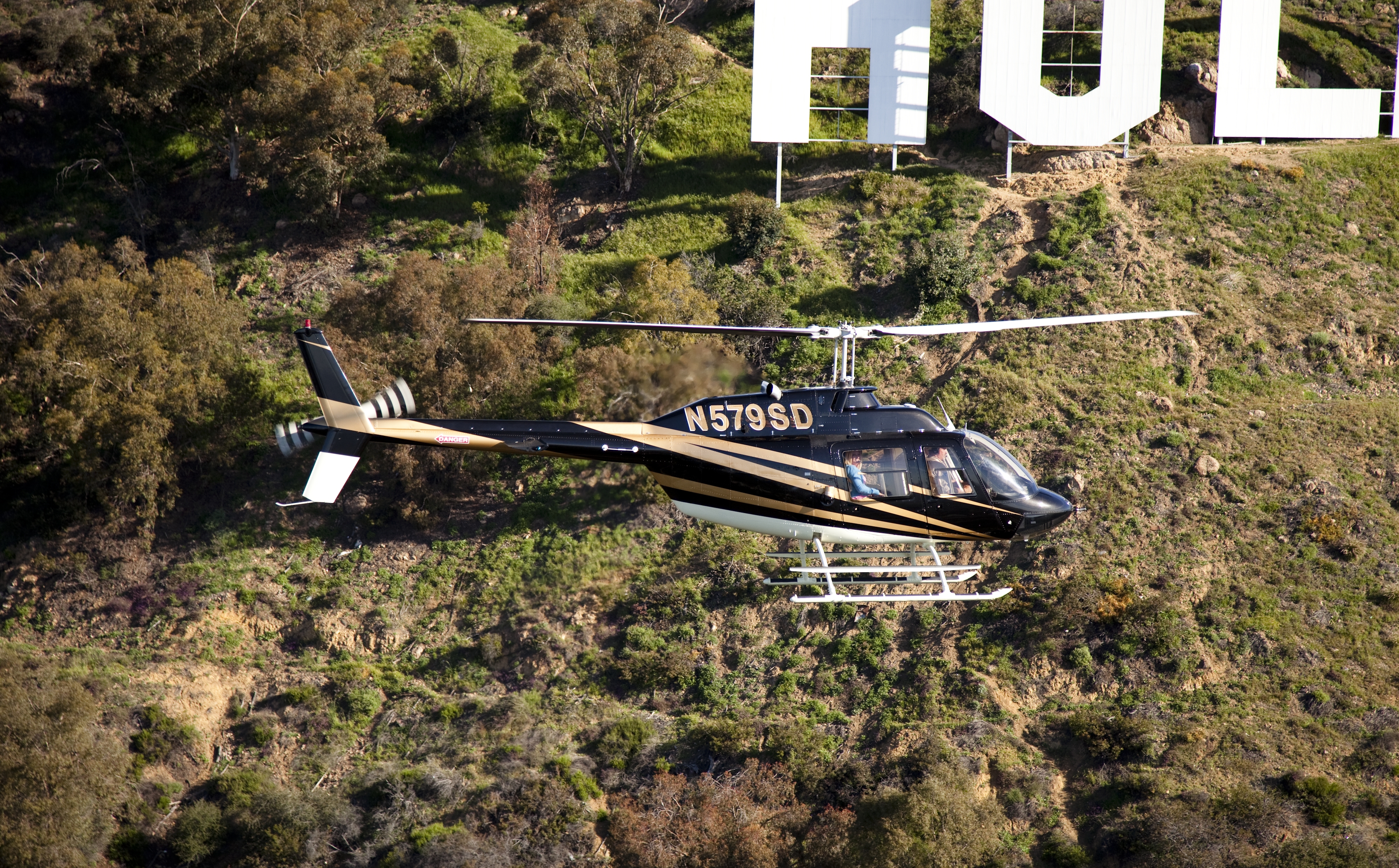 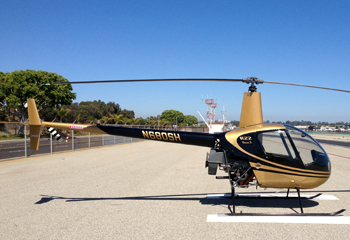 This is the mini version of our popular Star VIP Tour! For those short on time, who want to see the most in the least amount of time.

The same as the Star VIP tour but we skip the Long Beach, Los Angeles Harbor and the Palos Verdes Peninsula and fly directly to the Redondo Pier and start our adventure there north along the coast. From there you’ll see everything else that is in the Star VIP Tour.

Experience the beauty of the Pacific Ocean flying as low as 150 feet along the coast. You might see dolphins riding the waves, maybe even some whales depending on the time of year.

From Hawthorne Airport we are going to Redondo Pier where we will start our shoreline tour heading north flying over some of the most famous beaches of Los Angeles.  Passing King Harbor, Hermosa Beach pier and Manhattan Beach pier, we will start our descent down to 150’ to transition north through LAX Airport’s departure end of the airport, where commercial airliners will be taking off above us.  Next up is Venice Beach, Muscle Beach, the Venice Board Walk, and the world famous Santa Monica Pier we’ll do an exciting 180 degree turn around the Pier so have your cameras ready.  Off to the left you’ll see the Venice Beach Canals, Marina Del Rey.  Will descend back down 150′ above the surf, getting ready for our transition past LAX, you’ll see of to the left Playa Del Rey the area known as “Silicon Beach” is a nod to Northern California’s Silicon Valley.  Once we have cleared LAX we’ll head east at El Segundo back to Hawthorne Airport.  Off to the left you’ll see the sprawling LAX airport complex, with planes landing and taking off.

Have you ever wanted to fly in a Helicopter, wondered what it must be like to fly in an aircraft so smooth you’ll hardly even know you’re flying, ever come to a complete stop, into a hover over the beach? Are you short on time? Not sure if a helicopter is something you are interested in?

We offer you the Sneak Preview, we’ll fly to Redondo Pier drop down to about 500 feet and head up the coast past King Harbor, Hermosa Beach, Manhattan Beach and back to Hawthorne.
Warning: Helicopter flying is extremely addictive! So if you decide to extend your tour during the flight to a longer one, just let your pilot know and depending on our schedule he will probably be able to accommodate you.

We will venture deep into Malibu all the way to Zuma Beach. Flying low along the Pacific Ocean over some of the most beautiful and expensive real estate in the world and home to many of Hollywood’s most famous Stars. With an unbelievable view of some mega properties spread along the trip and only seen from the air.

Departing from Hawthorne Airport we are going straight to Redondo Beach and Pier, then we will head north dropping down to as low as 150 feet and head up the coast. Flying past King Harbor, Hermosa Beach, Manhattan Beach, LAX (As planes are taking off right above us), El Sequndo Beach (The only beach in LA that allows fires on the beach), Marina Del Ray, Venice Beach and the Santa Monica pier.
We continue past Will Rogers State Beach, the Getty Villa, Topanga State Beach, Malibu Beach, an up close view of “The Colony” at Malibu, Private and Secluded from the public (There is no other way to see the Colony then by Helicopter). Through Paradise Cove, Dune Cove, around Point Dune State beach. We will continue north to Zuma Beach where we will pickup the Pacifica Coast Highway and reverse our course and follow it all the way back south.
At the Getty Villa we will head inland towards the Getty Museum, over the Self Realization Fellowship. At Santa Monica we will climb and fly directly over the sprawling LAX Airport complex where planes will be landing and taking off right below us. Then it’s back to Hawthorne Airport and Star Helicopters.

This is our uncut version of our popular Star VIP Tour! You’ll see everything on the Star VIP Tour and so much more.

Taking Off from Hawthorne Airport we’ll fly to Long Beach Harbor over downtown Long Beach, around the cruise ship Queen Mary, past the Russian attack submarine Scorpion, through Los Angeles Harbor, along Palos Verdes Peninsula.
Flying as low as 150 feet over the water, past the beautiful beach cities of LA. We fly past the famous Santa Monica Pier and head up Malibu to the Getty Villa and the Getty Museum. Following the Santa Monica mountain foothills past the Getty Center. From there you’ll see everything on the Star VIP Tour until we get to The LA Coliseum., where we start a climb towards the coast, flying directly over the sprawling LAX airport complex while planes land and take off below us. A left turn and we are headed back to Hawthorne Airport and Star Helicopters.

For the truly inquisitive! The Oscar combines all of our tours into one unforgettable adventure!

With our central location to Los Angeles this tour allows us to provide a tour that goes further south, north and west than any other tour company can offer from their location in Los Angeles. You’ll see LA’s most popular sights and much more.
In what would easily take over two days of driving by car (That’s on a good traffic day, when was the last time you saw one of those days in LA?). You’ll see many truly stunning sights and spectacular views, only seen by helicopter.